Next in the CCMP/IMR joint seminar series will be  Wolgang Rihm talking about his chamber opera Jacob Lenz with Tom Service In the Chancellor’s Hall, University of London on Monday the 16th of April at 10:30am.

Massively prolific composer(we used to joke that he had to write music while he sat in the concert hall to fulfill his daily quota of measures… maybe it’s not a joke?), and a musician often put into the  new simplicity movement or neoromanticism niche but who remains unclassifiable — he premiered his latest opera, Dionysos, from Nietzsche, in 2010 to great acclaim and perplexity— will be talking about his early (at the tender age of 25) chamber opera Jakob Lenz (1977-78). 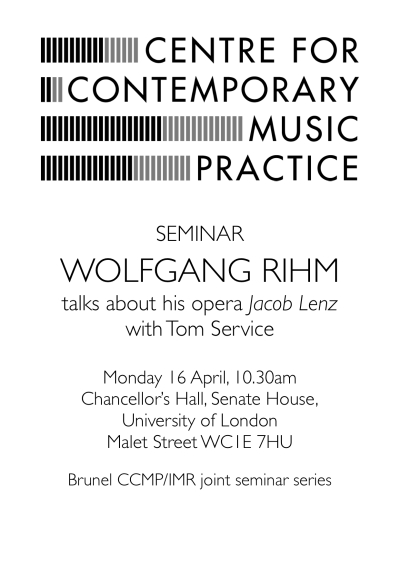 So, what do you think? Cancel reply